Jane Grigson’s friends and admirers share their personal memories, explain why her work was a source of inspiration and reflect on her legacy.

I met Jane for the first time in October 1985. I had put together a festschrift for Geoffrey’s eightieth birthday in March that year and had hoped that this evidence of my interest in him and his work might produce a meeting with the man I had admired since my late teens but had never met.

Geoffrey had been ill for some time—so incapacitated in fact that the letter of appreciation he had sent to me had to be dictated to Sophie. On the phone Jane seemed happy for me to meet her husband, but the event was put off at least twice due to Geoffrey’s worsening health. Eventually, however, she relented and invited me and my then girlfriend to visit Broad Town Farmhouse. I could hardly think of anything but this forthcoming meeting throughout the coach journey from London to Swindon. Would I be able to converse freely with a man whose put-downs in print could be merciless.

I needn’t have worried, for when we arrived at the farmhouse and Jane opened the door of the sitting room that afternoon what I found was a man laying supine on a couch who barely acknowledged our appearance and who when spoken to by my girlfriend responded by groaning and placing a handkerchief over his face. Jane hurriedly ushered us out of the room. Geoffrey was evidently incommunicado to all but his immediately family. As if in compensation, Jane led us up to her husband’s writing room—to the desk, the shelves of books and the giant photocopier. I thought of all the books that had been typed in that room since 1945, when Geoffrey had bought Broad Town Farmhouse at an auction in a local pub.

Jane then guided us around the garden that she and Geoffrey had created out of virtually nothing and which had featured in that wonderful book—Gardenage.  Jane prepared lunch and, knowing nothing of our tastes, had opted for simplicity – bloater paste with toast followed by roast chicken – all cooked to perfection. We chatted between mouthfuls, but I can only recall one revelation from Jane –  that Geoffrey’s incapacity had not prevented him from pinching the bottom of his attractive young nurse.

Geoffrey’s eventual death a few weeks later was followed early in the New Year by a invitation from Jane to attend a memorial reading of excerpts from his work at the Royal Festival Hall. It was good to see that some of the contributors to my festschrift were there, but even better to discover that Jane welcomed my girlfriend and I with the gift of several books written by her late husband, including  copies of The Harp of Aeolus with corrections by him and the very rare Legenda Suecana, a collection of love poems to a Swedish girl that had appeared just before he and Jane had first met. 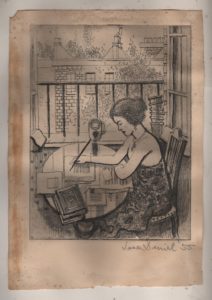 This was our final meeting, but not our final correspondence. Around 1987 I had invited her to visit me in Hertfordshire with the lure of a visit to the home of Dr Salaman, the renowned expert on the history of the potato. She politely declined this invitation, and I did get some indication of her emotional state when she admitted in her reply that it was only her work that kept her from the utmost despair.

This was the last letter I received from her. Not long afterwards I read that she had cancer and was on a diet that consisted almost wholly of carrots (which she must have hated), but her death in 1990 aged just 62 came as a real shock. A year later I made a pilgrimage to Troo in order to visit the maison troglodyte that she and Geoffrey had shared for so many years. I did not know Sophie back then and was reluctant to knock on the door, but I knew I had found the right cave when I gazed at the garden. It was very much the plot of a cookery writer. Three years later Jane was still on my mind when I began to research a biography of Geoffrey. A few years into it I met someone who had shared a house with her in west London. The artist Jack Daniel knew her in the early fifties when she was working as a young picture researcher for the publisher George Rainbird. We talked about her early life with Geoffrey, who she had met while he was editing the encyclopaedia People, Places, Things and Ideas, and just before we parted he fished out from one of his portfolios an etching of Jane which depicted her writing at a table in her flat, next to a window through which can be seen the rooftops and chimney pots of neighbouring houses. This, explained Jack, would have been around 1954—so many years before she made her triumphant debut with Charcuterie and French Pork Cookery. I would love to know more about Jane’s early years with Geoffrey and I suppose that I will discover more details as I continue my research.