When the educational charity in memory to Jane Grigson was first proposed in 1990, it was envisaged that a library of books on food and cooking should also be created. It was thought that the book collection would grow slowly but steadily as a result of donations from food and cookery writers, editors, and reviewers.

By the time the Jane Grigson Trust was founded in 1991, Sophie Grigson had made the generous gesture of placing the nucleus of Jane’s personal collection of food books on permanent loan to the Trust. These books form the unique core of the collection. The titles cover a wide field: from an eighteenth-century French treatise on butchery inspectors to Edward Bunyard’s Anatomy of Dessert.

Copies of Jane’s own books are accompanied by some of her notebooks and working papers used in their preparation; there are unedited typescripts of many of Jane’s articles written during her long association with The Observer newspaper and there is some of her professional correspondence.

The inauguration of the Jane Grigson Library was held at London’s Guildhall Library, the first home of the collection, on 10 December 1992. The ceremony was attended by many of Jane’s friends and colleagues. Caroline Waldegrave, Principal of Leith’s School of Food and Wine, gave the opening address.

During the next decade, the Jane Grigson Trust received valuable donations of books from benefactors and several most welcome bequests. The Trustees are always happy to hear from intending donors. Since Jane Grigson’s death in 1990, the Trust’s library has also been augmented by a selection of recently published cookery and food books. These titles have been chosen for inclusion by the Trustees on the basis of merit and historical interest.

By November 2005, when the Jane Grigson Library moved from Guildhall Library to Oxford Brookes University, the collection had doubled its original size to more than 4,000 volumes. At Oxford Brookes University the Jane Grigson Library is housed in the newly-built Special Collections Reading Room on the Headington campus, along with the archive of the Institute of Brewers and the magnificent collection of books on gastronomy that belonged to the late John Fuller.

In his welcoming address, Graham Upton, the then Vice Chancellor, said “The Grigson Library, taken together with the university’s existing collections, now constitutes an unparalled research tool of world class standard for academic food studies.” In reply, Sophie Grigson said, “My mother was very fond of Oxford. I feel her books have now come home.”

To mark the arrival of the Jane Grigson Library in Oxford, the Trustees decided to continue to expand their collection by the addition of specially selected books on food, cookery and related subjects. Publishers are invited to submit books to the Trustees for consideration. The publisher of any title chosen to join the collection is permitted to use the phrase “Accepted for inclusion in the Jane Grigson Library” in their publicity for the book, and to note this fact in any subsequent edition of the book. For further details of this scheme, contact the Chairman of Trustees on wgh@geraldeneholt.com

The Jane Grigson Library at Oxford Brookes University is available for use by any accredited scholar, researcher or interested member of the public. Further details

Benefactors of the Jane Grigson Library

The Trustees are grateful to the following people or their executors for donations, bequests and grants to the Jane Grigson Library. Whenever possible book plates are affixed to each volume to show the name of the donor and/or the previous owner.

HAROSET: A Taste of Jewish History (The Toby Press, 2019)
Dr. Susan Weingarten was an early recipient of a bursary from the Jane Grigson Trust and we were delighted to see her research come to fruition with the publication of ‘Haroset: A Taste of Jewish History’  (The Toby Press, 2019).
A food historian and archaeologist, and a post-doctoral fellow in the Department of Jewish Studies at Tel Aviv University, Dr Weingarten has specifically focused on the history of Jewish food, especially in talmudic literature. ‘Haroset’ is the first book ever written devoted to this iconic Passover seder food, a nutty, fruity paste that is said to symbolise the mud or clay for the bricks made by the Children of Israel as slaves in Egypt.
In a rich, detailed and fascinating narrative, she traces the development of this mysterious and ancient dish from the first hints of its existence in the Second Temple period, through the blood libels of the Middle Ages and the pogroms in Eastern Europe, to its role in the gender issues and modern food trends of today. The book ends with a collection of varied haroset recipes from around the Jewish world. It is an original and distinguished contribution to the canon of Jewish food history. 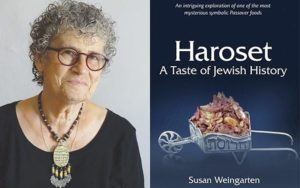